Nicola was born in Guildford Surrey, the daughter of entrepreneur Denis Bryant and his wife Sheila. She has one younger sister, Tracy. They grew up in the Surrey Hills in the constant company of a dachshund.

After training at the Webber Douglas Academy of Dramatic Art, Nicola's first professional role was the American companion Peri in Doctor Who opposite both Peter Davison and Colin Baker — a part she played for three years. She has also made guest appearances in numerous television shows — most notably as Rowan Atkinson's niece in Blackadder's Christmas Carol — and also in Casualty; Cravings; Wild Seed; Animal Ark; Doctors; Holby City; Love in Hyde Park; My Family; Scoop; the award-winning comedy The 10 Percenters; and three series of The Biz. Nicola's most controversial roles were playing the royal correspondent in the drama documentary on Princess Diana's inquest, There are Dark Forces (which has been renamed several times), and playing God in The Theory of Everything.

Most recently Nicola appeared in the BBC series New Blood, the mini-series The Promise, and as Lana in Star Trek Continues.

Nicola's career spans over 35 years, and she has worked both in the UK and the USA. In the West End, Nicola's debut was in the thriller Killing Jessica where she played the juvenile lead opposite Patrick Macnee at the Savoy Theatre. She has also appeared in the award-winning production of Strive, yet again playing the juvenile lead at the Duke of York's Theatre and in Tom Stoppard's award-winning Rock 'n' Roll at the same theatre. She received rave reviews for her work on the London Fringe in Lost in Exile (Zelda Fitzgerald) and Purple Politics (in which Nicola played twenty different characters ranging from Marilyn Monroe to Margaret Thatcher).

Appearing in many award-winning commercials all over the world, Nicola has most notably been the face of Woolwich Building Society, National Saving, and Nurofen. For the past three years, Nicola was also in the Ridley Scott Associates production for Axa Health Insurance.

Nicola was one of the actors who joined Big Finish Productions from the start. She has loved working on so many different audio ranges, not only continuing to play Peri in the new Doctor Who releases and "The Lost Stories," but also appearing in Dark Shadows, The New Adventures of Bernice Summerfield, Iris Wildethyme, The Confessions of Dorian Grey, The Companion Chronicles, UNIT, and Judge Dredd ranges — two of which she also directed. She has also featured in one-off dramas Night of the Triffids and The Mervyn Stone Mysteries.

Returning to live happily in the Surrey Hills having spent 30 years in London, Nicola now enjoys the company of Harvey (who is three quarters dachshund and one quarter papillon) and his new friend Marnie. 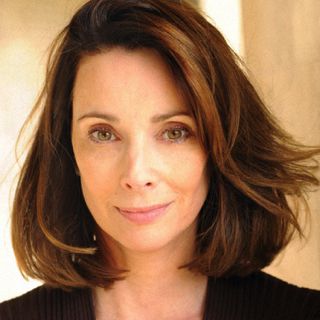